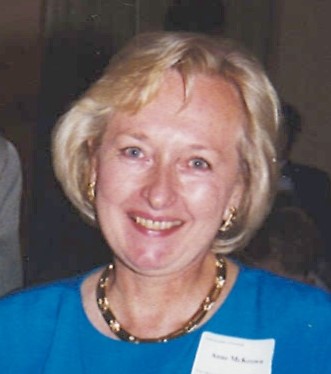 The SASW board is pleased to announce Anne Gornal McKeown as the winner of the 2022 Matula Award.

Anne has been a long-time member of the society and has served as secretary and vice-president.  She was actively involved in most of the activities of the society, helping to organize events, including the early Mikuláš parties, and even writing articles for the newsletter. She was always promoting SASW to others in the area and even beyond the DC-area, including in Slovakia, where she often traveled. Coming from a Slovak diplomatic family, Anne was active in promoting the society to the Slovak Embassy staff, which was very important in establishing SASW’s credibility in those early years. One particularly memorable event was the farewell dinner for the first Slovak Ambassador to the U.S., Dr. Branislav Lichardus, in 1998.  Anne helped organize an outstanding farewell dinner event, which really helped establish SASW as a first-class organization with the Washington Slovak-American community, and the Embassy.

The SASW board would like to thank Andrea Bomar, David Frankel, and Marlene Yencho for serving on this year’s award selection committee.