We have two virtual speaker events planned for 2020.

By 1944, the Russian and First Czechoslovak armies were moving aggressively across Poland and Ukraine in a broad front, to crush Germany and liberate the subjugated citizens. Although the armies initially planned to completely bypass the Carpathian Mountains as they moved westward, they received word of the SNP (Slovak National Uprising) plans. They planned a quick diversion to support the partisans by entering through Dukla Pass and linking up with them in Banská Bystrica. This controversial “diversion” turned into one of the bloodiest conflagrations in the history of Slovakia. But things went wrong. Very wrong. The six days it should have taken to get to Prešov turned into 50 days to get to Svidník alone, and over 138,000 casualties.

This presentation provides a broad overview of the events that precipitated the attack, the battle itself, and its impact on the future of the country’s villages and people. The battle involved 1,350 tanks and 139,000 casualties, earning the site the name “The Valley of Death.” Yet here in the United States, it remains one of the least-known battles of the war.

Among the very first industrial-era immigrants to the United States were citizens of Austria-Hungary, who were recruited to work the coal fields of Pennsylvania and certain other states. An absolute necessity for both industry and homes, coal was king.

In this talk, John Righetti will outline what coal communities were like at the beginning of mass immigration to the U.S., and how they even became an economic system distinct from the rest of America. He will explain how coal communities developed as a culture unto itself. For anyone with family roots in coal mining communities, this presentation is a must.

The SASW Speakers’ Series, which started in 2003, grew out of the occasional SASW-sponsored talks that were held mainly at SASW annual meetings.  At first, the talks were mostly events of opportunity, scheduled to take advantage of speakers who were local or who happened to be in the area and were often scheduled sporadically.  But with the launch of the Speakers’ Series, SASW sought out scholars and other people who are knowledgeable about different aspects of Slovakia and its culture.  What we originally thought would be a somewhat limited pool of speakers has turned out to be a large group of experts who are delighted to have an audience that also shares their interest in Slovakia and their specialties.

Over the years, the assortment of subjects has been broad, from immigration to music, genealogy, politics, literature, architecture, travel, history, and crime novels.  Our range of speakers has also been impressive.  Policy experts, academics, genealogists, folklorists, current and former diplomatic staff, authors, an architect, researchers, and historians have all shared their knowledge and views with us.  Their presentations have given us overviews of their subject field, as well as caught us up on their own research.

We are always eager to hear your suggestions about topics of interest and potential speakers.  If you would like to see a comprehensive list of past speakers, please click this link List of Speakers. 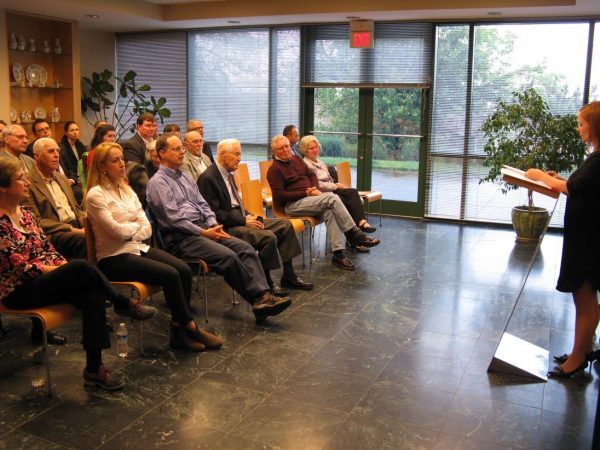